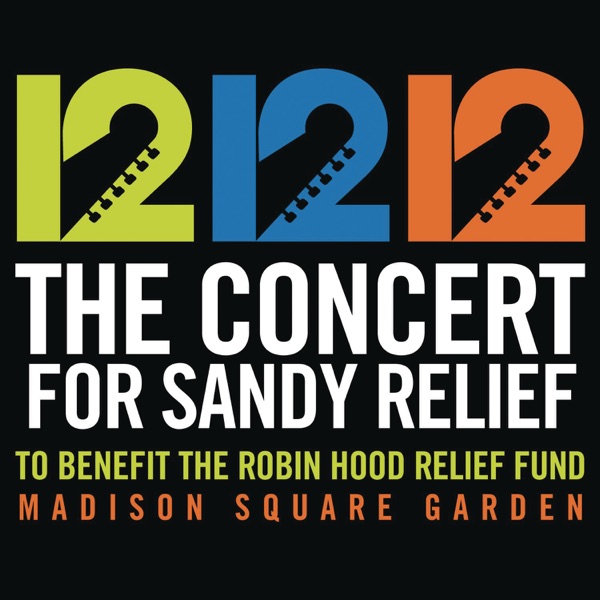 Land of Hope and Dreams

Another Brick In the Atlantic Wall

Got to Be Better In a Little While

You Got Me Rocking

You May Be Right

Us Against the World

The concert on TV was great. This'll be good!

I don't think people realize that this isn't about the music being good or not. It's about people helping others; the music is just a bonus. And yeah, most of these guys are old farts just having fun and using their influence for a greater good.

wish tom jones was there he he i do like Tom Jones we all need to pitch in when a us family memder is in trouble. we are a grand family lets act like one

No New York State of Mind no deal

How could they not include New York State of Mind? This was probably the best song of the night.. Oh well, not really worth buying...yet.

I enjoy it so much each time I listen to it. It's one of my favorite compilations and the editing was done well in my opinion. Some things had to be left out to make the album marketable and I think iTunes got it right this time.

How come Eddie Vedder didn't get a set list to play and that dumb monkey did? What is that? People should have thrown bananas at him....

I really wanted hallelujah but I had to buy the whole album so I did. The us needs the money anyway. :)

I'm kind of hoping we have another hurricane just so there can be another concert!

All of the performances on here are spectacular, and the money goes to a great cause. Many of classmates at the college I attend were personally affected by Sandy, so I know that every penny towards their cause is important. These performers did not disappoint.

How is New York State of Mind not on this set? Pretty relevant don't you think?

On 12-12-12 I was watching the live broadcast of the show from my living room, all the way from Springsteen to Billy Joel / Alicia Keys at the end (except for Kanye West, who I completely skipped through). I was sold on watching from the very second I heard Springsteen and the E Street Band was going to perform, who I saw six days previous as well as in April 2012. They completely rocked the house, as well as Bon Jovi, Eric Clapton, The Who, Billy Joel, and other rock legends. I loved it; it was incredible. I especially loved how it was mostly rockstars instead of rappers and pop-stars, because they simply don't compare to good ol' rock n' roll. This album has all the highlights (note how Kanye West was not included), except my only complaint is that Springsteen's "My City of Ruins" was excluded. It's a beautiful song, very relevant to the situation, and iTunes doesn't have any live versions of the song yet. They also left off "Livin' on a Preyer," but there are live versions available of that song on iTunes so I'm not as disappointed. In all, great album, great cause. I'm trying to donate as much as I can for Sandy relief, so the songs came as an added bonus for me. Buy it, raise money for those in need, and you won't be disappointed.

The one and only PWR

Kayne can't sing. Maybe another career field would suit him better, a thug perhaps? I'm so glad i tunes didn't put him on. I wouldn't have bought it if he was included

I am confused as to why I cannot download my computer.

I rarely write a review on iTunes but I couldn't let this one pass. As many have commented here, this album is going towards a very important cause but the spirit of community, of inclusiveness is lacking. I blindly downloaded the album without checking the individual songs. Boy, was I surprised when I saw soooo many performances missing! And to exclude Kanye after he donated his time is insulting and contradicts the spirit of togetherness. Granted, it may not have been his best performance but....Shame in you, iTunes!!!

Funny girls on me

New Jersey Do it!!

Who is the moron who doesn't realize this is for hurricane Sandy victims not the elementary school tragedy . Songs were good but not put together well and some things cut out

Sell the songs as singles so they can raise more$

finally downloaded this and was very disappointed that the BIlly Joel songs I purchased this for aren't even on the album! I watched the concert and loved his extensive piano riffs. All that was cut from the compilation.

I understand this is a relief fund thing, but still. I see no reason to force people to do all or nothing.

I am a Kanye fan . & even if I wasn't he SHOULD have been represented on this album. The disrespect is the reason why I won't buy this album. He was there & gave his all just like the other performers . The other performances were good as well but that's just disrespectful . This is the reason why celebrities stop caring about there "fans" and are only concerned about when there next check is coming . I'm totally offended by this album . Doesn't deserve my $12.99 -_____-

The original of each song was the best. The cheering of the crowd is annoying. Adam Sandler was high when he sang.

I would gladly have paid 20$ for such an amazing album, for such a great cause, but I am disappointed they left out Bon Jovi and Bruce Springsteen's collaborative songs.

I am disappointed in some of the missing tracks, specifically from Paul and a few others. I watched the show from home in its entirety and felt like I was there! So much fun! I enjoy Kanyes music however, I am glad he's not on this album. He honestly just didn't "belong" in the line up of artists/music. These are classic rock legends, not rappers flailing about wearing skirts rapping over an iPod. His music didn't belong and it's as simple as that. I am wondering though exactly how much of the proceeds of me buying this album actually gets donated? I would feel better knowing its a decent amount!

I am not a Kanye West fan. In fact, the only time I've come across him is when he said something inane about President George W Bush. He said Bush, who sent $15 BILLION to fight HIV/SAIDS in Africa (the only American president ever to do such a thing.), didn't like Black people. There was a disconnect somewhere in Kanye's reasoning. Like I said, that's the only time I heard or saw him. But I see here that there are a lot of people who don't like him asking that his material not be included on the album. I say he should receive thanks from the community for taking time to perform on the show. Obviously there are SOME people who like Kanye. So let's be inclusive, eh?

which sany was this helping, hurricane sandy or sandy hook elementry?

I am really not understanding why everyone is bashing Kanye?? Maybe his music is not for everyone, but we all have different tastes. I happen to like a few of his songs. With that being said, I think for him to care enough to donate his time to this album speaks volumes.

the reason why there are such few tracks and a lot of missing duets is because there were sound issues that the guys in the recording studio were not able to patch up after the show. i know someone who works for the studio that did the mastering and such for the show and he said that there were huge issues during bruce's and paul's set. so instead of putting out a crappy public, they pulled the best sounding performances from the night and put them out to the public to buy. with that said, it was a good, greatest hits album of the show. if you were at the show, like i was, or enjoyed watching it, it's a great album to have with a many fine performances.

I know its going to a great and worthy cause, but I only want the WHO songs (By the way, the fantastic Keith Moon tribute, "Bell Boy", is missing). I dont want to have to suffer through Alicia Keys and Bon Jovi in order to get them!

Where are the duets?? Bon jovi and Bruce ? They were great together and they didn't put them on the album. As for Kanye, he was horrible and it was a good time for a bathroom break.

No brainier once I saw who was left out!

Funds are going to a great cause. Folks with destroyed vacation homes won't even get a dime from the Feds If they own a home elsewhere. Robin Hood even posts specific beneficiaries funded by their profits. but I'm one of many buyers who accepted the iTunes Pre-Sale offer of 30 tracks for $12.99 during the live concert, before any specific tracks were identified. What happened to the other 6 tracks?? Caveat emptor!

The way this album benefits all the people that were affected is awesome but why can't you just buy the songs that you want, instead you have to buy the whole album... Dumb

Kanye contributed. I'd buy but the blatant diss once again to him makes me pass. Too bad. I know it's charity but this is getting ridiculous now. Kanye can do no right.

Some of this CD is really good,,,rest is just good. Stones and Brooooooce are the best of the group.

Most of the time these albums that raise money for a cause have good intentions, but honestly the music is lame. Not in this album.

To the fools complaining about missing songs or artists, you can see the track list before you buy it and even hear samples, why did you buy it?

I saw the who in Minneapolis and they did amazing I love them!!!!!!!

First off, the money is going to sandy victims but now, ket me tell you something you don't already know; they averaged the concert to be played in 2,000,000 homes worldwide so if all you selfish and stingy people with no hearts can't donate a little more than ten dollars than you don't deserve to have the computer your likely reading this on. Second, these songs are amazing. The album is worth it without it going to victims of sandy. At first I didn't like all of the songs, but the more i listen to them, the more i like them. BONUS: you get Adam Sandlers awesome hit song, "Sandy Screw Ya" So, just open you heart… and your wallet and make a change

It has been a long time since I bought an album and really liked every song on the album. The money goes to a good cause and there are some really great performances. I am very happy with this album.

i hope everyone realizes that there was 55 songs played during the concert, this is only 24. where is the rest of paul mccartney and some other artist, nobody buy this album till they put in all of the songs that we deserve.